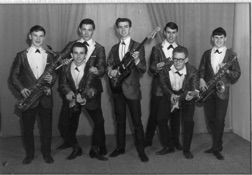 I started by taking piano lessons when I was 7 years old & sax lessons from age 8. I got interested in playing in bands at age 14. My first band was called “The Rebels”... we played surf music & I played sax. I also got a call from a relatively successful group in the area & started playing gigs with “Joe Eddie & the Penetrators”.

It wasn’t long til I connected with a drummer who was a couple years older Frank Mattioda & we put together a band called “The Sonics” which became pretty successful for a local group. We won the battle of the bands at the Springfield Illinois State Fair. We then evolved into “The Far Cryse”.  I played in bands all through high school. One of the guys I got started with played with me off & on for decades, singer-drummer-percussionist Chuck Wilson.

I attended Southern Illinois University as a piano major...studied composition, arranging, and conducting...and played sax in the Concert & Jazz bands. I was gigging the whole time  that I was going to school. I eventually started going out on tours with various groups & would come back in between tours and take some more classes. I finished all my course work for a Bachelor of Music but didn’t graduate because I never went back to give my Senior Piano Recital.....maybe one of these days.

After high school,  I started experimenting with different music ensembles, always as a bandleader. One of my groups “Seven” was signed to Curtis Mayfield’s CURTOM label (during his “Superfly” days) although the band self-destructed from within before we could finish a record (when the singer punched the guitar player on stage)

I worked a lot in St. Louis & Illinois. I was also exploring a lot of different music styles...from Bach to Bo Didley, Beethoven to Bird, Zappa to James Brown. I got to play for a while with the blues legend Albert King. Did a lot of “Jimmy Smith” style organ playing in  the jazz clubs. My talented little brother Rex had been playing bass since grade school, he and I started working together around this time.

I was doing a LOT of playing in those days. Some weeks it would be: go to college from morning til afternoon, play from 8-12 in a club, play from 2-4am in an after-hours jazz club, then get up & do it again. I was Music Director at the St. Louis Playboy Club for a year and got to see & work with some great name jazz artists. This is when I started playing with my lifelong friend & drummer Lynn Hammann.

My Brother Rex, Lynn Hammann, and I became a very tight trio and gigged around in a wide variety of styles and settings. For a while we were backing a lot of singers who would come through the St. Louis area.  Most of these singers were older touring artists with hit records under their belts. Around 1973 an amazing young singer from New York named Didi Carr came to the supper club we were working. Once she saw us with our shoulder length hair she didn’t think we could read her charts...much less play her music The chemistry with Didi was great however and we joined forces and toured around the country as “Patch & Didi”.

After that I started working with trumpet phenom Phil Driscoll in St. Louis at the Chase Park Plaza. We then went on the road and ended up in Jacksonville, Florida. After realizing I needed to do “my own thing”, I left Phil & went back to Illinois for a little more school, gigging & band explorations.

Finally I put together a group & went to back to Jacksonville, FL and worked for about a half-year. I also got a gig playing with the Jacksonville Symphony Orchestra which opened up new musical vistas.

I had a manager who kept trying to get me to relocate in LA. Finally in 1976, Brother Rex & I went out to check it out. Things started to happen immediately. After being there for about a month, Rex & I got a gig with Blue Note artist & legendary drummer Alphonse Mouzon (Weather Report, McCoy Tyner). We instantly found ourselves playing cutting edge jazz fusion and recorded an album “Blue Note Live at the Roxy” with a host of jazz stars.

We also started doing a lot of jazz & funk gigs as “The Robinson Brothers Band”. We were rubbing shoulders with a lot of world-class musicians in the 70’s LA fusion scene.

We also started doing a lot of jazz & funk gigs as “The Robinson Brothers Band”. We were rubbing shoulders with a lot of world-class musicians in the 70’s LA fusion scene.

We connected with Mel Torme’s son Steve March Torme & did a cross country tour in support of his album, opening the show as the The Robinson Brothers Band. We also did a Liza Minelli album around this time, and worked extensively with fusion drummer Les DeMerle.

I was recommended by the great Don Ellis for a gig as Music Director for Buddy Greco. Working with Buddy took me to a different dimension of gigs, conducting a lot of big bands in Vegas & Europe. One of the highlights was conducting the Count Basie Band, as well as doing a lot of TV shows, etc.

While I was touring with Buddy Greco in 1978, I got a call from an old Illinois friend, Richie “Gajate” Garcia, who was playing percussion for Frankie Valli. Frankie was hot with the song “Grease” and was looking for a new keyboard player. I was recommended and after some “long-distant” auditioning got the job. That was August 1978...Grease was #1 on the charts things were rockin! At the end of the year, his music director decided to leave and I got the gig....more than 40 years ago.

Working with Frankie Valli for over 40 years has been an incredible ride. I have  had a world-class education being able to rub shoulders with this legendenday force in music. The icing on the cake has been the success of “Jersey Boys” and we are still selling out venues, doing records and TV. Kind of fun these days!